The Sun Valley Ski Club was founded by W.A. Harriman in 1936, the same year the resort opened. The club was established not only for the enjoyment of its members, but also to host races at the new resort. The first race was the Sun Valley International Open, which attracted the top skiers from around the world. This race later became known as the Harriman Cup and continued to be one of the top races in the world. The SVSC also organized a number of other races for both its junior and senior members nation-wide.

In 1966, the SVSC held its first Ski Club Week as a reunion for its pre-war members. This annual tradition continues to attract members from around the world, who return to Sun Valley and join in with locals for an activity-filled week of races, cross-country tours, and social events.

Also, in 1966, the club established the Ski Education Foundation for its junior race program. Over the years, this foundation has achieved an unsurpassed level of excellence, placing many skiers on the U.S. National Team, and has now become an independent organization.

To encourage proficiency and enjoyment of skiing and other winter sports with their attendant relaxations;

To encourage the construction and maintenance of ski tows, ski lifts, and all such labor saving devices;

To appreciate comfortable accommodations, good food and drink and by all other means to take advantage of the beauty of the mountains in winter or at any other time. 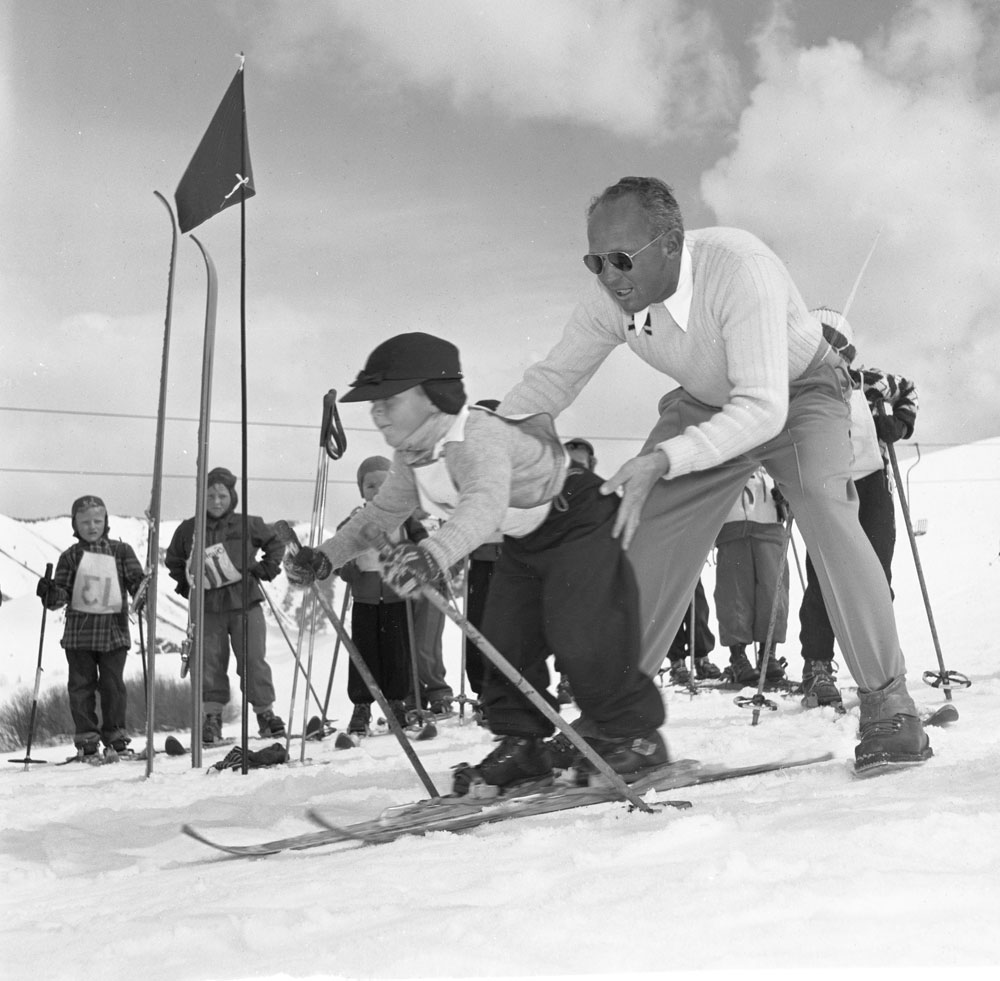 Your club was organized in the fall of 1936 with about 100 members and during the winter increased it’s membership to about one hundred and fifty. The object of the club is as stated in the constitution which you have just read, and it is now definitely established that the objective of the club can be carried out.

On February 6th, 1937, we were admitted to membership in the Pacific Northwest Ski Association whose territory includes the States of Washington, Oregon, Idaho and Montana and whose activities have greatly increased the interest in skiing in the northwest.

As soon as we received official recognition our chairman and governors proceeded at once to plan an open downhill and slalom tournament to be held at Sun Valley and to be called the “SUN VALLEY INTERNATIONAL OPEN” Downhill Slalom and Combined.

The dates of March 13th and 14th were chosen as the least likely to interfere with any already established events, but unfortunately did conflict with the annual event of the California Amateur Ski Association which was most regrettable. Sanction for our event was kindly granted by the National Ski Association of America and the Pacific Northwest Ski Association.

Just a few days before the date scheduled for the “SUN VALLEY INTERNATIONAL OPEN” our chairman received a telegram from Dan Hatch of the Dartmouth Outing Club asking us if we could include in our races the “UNITED STATES NATIONAL AMATEUR CHAMPIONSHIP” Downhill, Slalom and Combined. This suggestion was brought about by the unfortunate snow conditions in the East at that time, and the fact that we had been fortunate enough to secure for our races a very widely representative field of international skiing talent. We were much pleased by this suggestion, welcomed the opportunity to take our place in the skiing world and gladly undertook the attendant responsibility. Fortunately the officials of the Pacific Northwest Ski Association by that time were on hand, gave us their full time, advice and assistance and so effectively took charge of the events that they were run off to the reported satisfaction of all concerned.

This seems a fitting time to thank President Al Lindley, and governors Roland Palmaedo, Dick Gale and Glen Lloyd together with other members of the club who were there at that time and who did their share to make the event a real success. Having worked with Pete Hostmark, President of the Pacific Northwest Ski Association and his officials Allan Granstrom, Fred Van Dyke, Ken Binns and Ben Thompson we look forward to future events with the hope that their able cooperation will always be available.